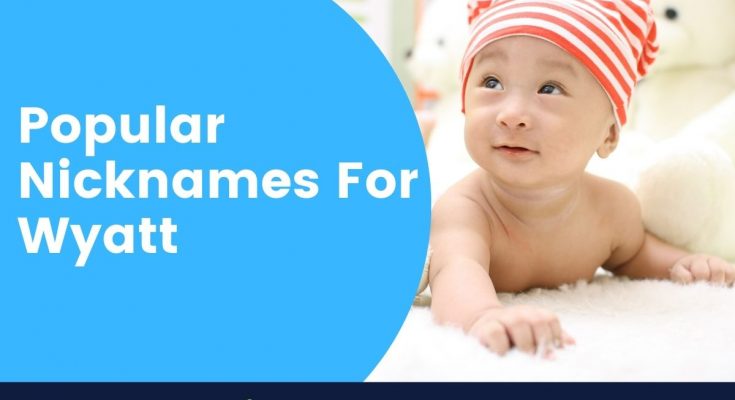 Calling someone using their first name, what’s the fun in that? Let’s make the relationship between you and your beloved a little more meaningful. And nicknames are the perfect way to do that.

They are personal assets that express love and care beyond words. Names often tend to be formal and impersonal. But with nicknames, you get to personalize and express how you feel about your beloved Wyatt in your own way.

Searching for the perfect nickname can be quite a task. But don’t worry, we have the solution right here. In this article, we are going to go through over 50 popular nicknames for Wyatt that have been meticulously organized for your benefit.

Remember to skim through all the names before making a decision.

Origin And Meaning Of The Name Wyatt

Before we delve into the list of nicknames, let’s dig into the meaning and origin of the name Wyatt. Knowing the origin often gives you a better perspective while choosing a nickname.

To find the source of the name Wyatt, we have to travel back to Medieval times. Derived from the Medieval ‘Wyot,’ the general meaning stands as ‘warrior,’ or ‘one who can brave war.’ The ancient word ‘Wyot’ had several alternatives like Wiot, Gyot, Wyeth, and so on.

All these names had been derived from the Old English name Wigheard. If we break down the words, ‘wig’ means ‘war’ and ‘heard’ or ‘hardy’ means ‘brave.’

But that is not all. This medieval name has traveled across countries picking up several variations and meanings on its way. The name was initially used as a patronymic surname. Later it traveled to Norman lands, France, and so on before it gained prominence as a name.

The name Wyatt was very popular among the nobility in the previous century. Currently, it has again started gaining more attention, especially in countries like the USA.

What Comes To Mind When You Think Of Wyatt?

Personally, when I think of the name Wyatt, the word ‘versatile’ comes to my mind. That is to say, Wyatt can fit in any circumstance. He has the potential to do any job asked to do starting from background management to leadership roles.

The name reeks of confidence and perseverance. Other than that, Wyatts are independent souls. They are mysterious to unfold at the first go. This is because they have a lot of layers to their personality. Being war-brave, they can endure emotional turmoil and still keep themselves steady and balanced.

These are some of the general personality traits associated with the name Wyatt. These can be your guiding parameters when you go on the mission of choosing a nickname for your little Wyatt.

We have also provided little notes after every name in the list to make it easier for you to choose. So, without further delay, let’s check out the list of nicknames.

Everybody loves a good nickname! Wyatt is one of those names you will hear time and time again. One thing’s for sure, this popular name isn’t going anywhere any time soon. We’ve listed below some of the most common nicknames for your dear Wyatt. Check them out and pick one!

Girls love giving their boyfriends adorable nicknames. While some may have no problems calling their man by his real name, others may want to have a more romantic and cute nickname for their favorite guy.

Wyatt is such a lovely name that even if you don’t love this boy’s real name, you will surely find it hard to resist the temptation of giving him one of these cute nicknames.

Looking for a hilarious nickname for your dear Wyatt? Sometimes you just need a little inspiration to get your creative juices flowing. To give you that inspiration, here are some funny nicknames for the Wyatt in your life.

Not sure what to call your new best friend? These are the super cool nicknames for Wyatt you need to know. Just a heads up, many of these nicknames are rather funny in nature, so you may have to ask two to three people before settling on one that fits your Wyatt just right!

Nicknames are mostly a way of showing affection, love, and respect to your friends or family members. Are you tired of coming up with the same old boring nicknames for Wyatt? Trying to find something original and cool?

Don’t worry! We’ve got you covered. Below are some really unique nicknames for Wyatt to help you find an interesting one.

We may have come to the end of this list, but these nicknames are not all. So, put on your thinking caps and try to think of other great nicknames for Wyatt. With its unusual alphabets, then will be tons of quirky nickname options that you can go with.

If you want something completely unrelated to the name, you can go with classic nickname choices. However, a little customization is always the best option. It becomes a life-long gift or a wonderful expression of love that will always be by them no matter what.

Hope this list makes it easier for you to finalize that perfect nickname that suits your beloved Wyatt. If you have any other suggestions, make sure to let us know.

Till then, happy nicknaming!