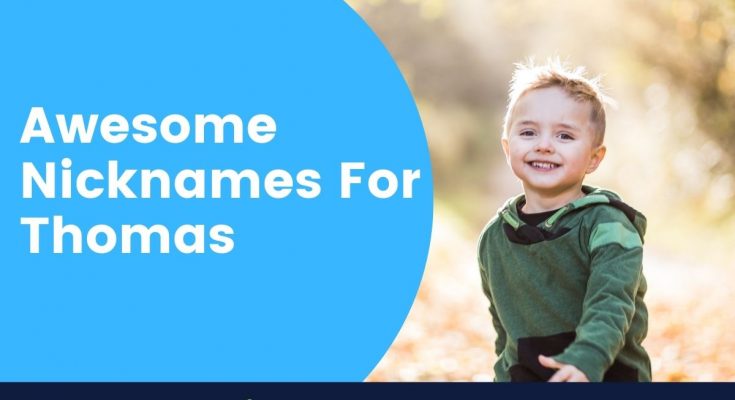 The name Thomas has sustained its position as one of the most popular names for boys. From Thomas Edison to Tom (Thomas) Cruise, there are thousands of famous personalities bearing this name, and the list is endless!

Since Thomas is such an admired title, there are all the more reasons to find some suitable nicknames that are as marvelous as the original name.

Finding a good nickname for someone named Thomas can seem more like a tedious task than a fun-filled activity.

So, today’s agenda is to acquaint you with our list of some of the most awesome nicknames for Thomas to make your research a lot more fun and easier!

Additionally, each option listed in our round-up of nicknames comes with our two cents worth of opinion to make your nicknaming journey all the way merrier!

But before we get started, let us first find the meaning and origin of the name Thomas.

Meaning And Origin Of The Name Thomas

Thomas is classified as the name of Thomas the Apostle, out of Jesus’ twelve apostles in the Greek New Testament of the Bible. This name is a masculine title that hails from the Aramaic origin and bears the meaning “twin.”

Although this name was recorded as far back as in biblical times, Thomas still holds its records as one of the most sought-after names for males around the globe. In fact, it has also been widely used as a surname among the French and Americans, being the twelfth most commonly-used surname across the United States.

Now that we are familiar with its meaning and origin, let us head straight to over 70 awesome nicknames for someone named Thomas!

An adorable name like Thomas deserves a cute nickname to go with it. A great trick to finding a charming nickname is to consider short forms of the original name itself.

If you are looking for a sweet endearment to call out the Thomas in your life, then look no further than this list:

If the man named Thomas in your life is someone you can rely on, with no conditions involved, then it’s important for you to celebrate him in a way that brings bouts of laughter on his face! So, here are some of the funniest nicknames for Thomas for you to choose from:

Perhaps all the nicknames that you have read so far just don’t look right on the Thomas you’re searching nicknames for. If you are looking for a unique nickname that sets your Thomas apart from the crowd and helps him make a statement, then glance through the following options we’ve listed for you:

There’s nothing wrong with picking a popularly-used nickname for the guy named Thomas in your life if it strikes a chord with you! To name a few, here are some of the most popular nicknames for Thomas, so have a look:

If you’ve had your fair share of cute and funny terms of endearment for someone named Thomas, and you now want to learn how to mock them instead, then look no further!

While some of the mean nicknames listed below might appear innocent-sounding, others are downright devastating—use them at your own risk! Have a look:

The best part about giving a fitting nickname to someone you love is that it strengthens your equation with them. The right nickname never fails to bring a smile to the face and represents a person’s identity to others. This was all about over 70 excellent nicknames for someone named Thomas.

Whether you choose a cute nickname, a funny one, or just a word that barely makes any sense, remember that in the end, it all boils down to having fun and enjoying the process.

If you’re feeling creative and have an innovative nickname for Thomas, then be a dear and share it with us!