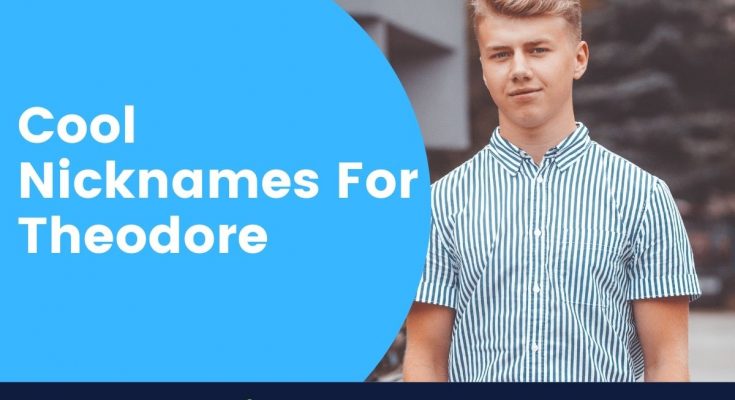 There are only a few names as adorable and classy as Theodore. In complete awe of this charming name, we have decided to roll out a list of cool nicknames for it. This comprehensive curation, stored forever in this archive, will come in handy to you whenever you are looking for nicknames for someone special called Theodore.

Our comprehension of the name Theodore is quite rosy. Manly, mature, and motivated, Theodore is someone who can easily sweep you off your feet. Having a nice conversation with him could be the most fulfilling part of your day, given his awareness, concern, and passion for things.

Besides that, he is kind and caring, in his own awkward way, which only accentuates one’s liking towards him. In our view, such a man deserves all the love in this world, and a small part of it can be giving him a well-fitting nickname.

So, we did the brainstorming and research for you, and now, all you have to do is sail through an exciting list of nicknames for Theodore and place your finger on one!

Let’s have a better insight into the meaning and origin of the name, and then we dig into the nicknames.

Meaning and Origin of Theodore

Primarily a male name of Greek origin, Theodore means ‘Divine Gift’ or ‘Gift of God.’ It is a derivative of the Latin Theodorus, a variation of the Greek name Theodōros.

The components that form this are the Greek words ‘theos,’ which means God,’ and ‘dōron,’ which means ‘gift,’ adding up to the meaning ‘God-given’ or ‘gift of God.’ Some other names that have the same roots are Theodora, Dorothy, and Dorothea.

When Theodore Roosevelt took up the Presidency of the United States in 1901, the name Theodore got massively popular with Teds and Teddys roaming everywhere. Post that period, it saw a few ups and downs, but no one could really look past the cuteness of Theo!

Besides this, Theodore “Theo” Van Gogh was the younger brother of artist Vincent. Moreover, The beloved character Laurie in Little Women was named Theodore Laurence.

Common nicknames are such that you might hear them every other day, but they win your heart every time you do.

If you are looking for a similar kind of nickname for Theodore, then the following options are all set to charm you.

Feast your eyes on these sugar-cake nicknames, and you will want to fill a bag full for Theodore. The upcoming list contains some super cute nicknames that might make your dear one tear up with glee.

So, get ready to overload the scale with love!

The names that lie below will not tickle Theodore’s funny bone; they’ll fracture it! An amazing combo of smart and hilarious, these nicknames will have him laughing for sure.

Just peek into the pot and grab whatever you like!

If you will define Theodore as the coolest guy around, then the following troop of nicknames is tailored for you.

Hop in to find some names that will make him feel like a king!

If you feel that a nickname should be an extension of the bearer’s personality, then we have an exclusive list of unique nicknames for you.

These nicknames, parallel to Theodore’s traits, will seep into his identity and give him a sense of individuality. And believe us, he will love you for giving him such a pet name. So, have a glance and choose the best for him.

So that was our round-up for nicknames for Theodore, and we hope it could be of some help. As you can see, there are plenty of suggestions, and we would love to know which one wins in your opinion. And if you couldn’t pick a nickname from here, you can draw some inspiration and put together your own nickname.

If you happen to do so, then do share it with us, as we would love to feature it in our collection. Until next time, happy nicknames!