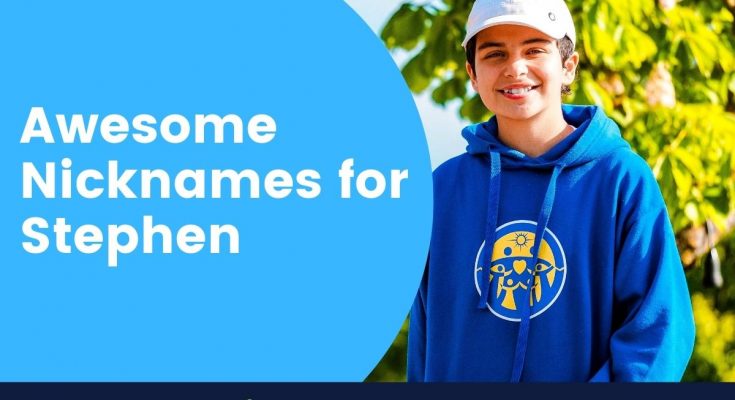 One of the most widely favored names for boys, Stephen reflects warmth and goodness of character. It retains that old-world charm along with the crispness of sound, making it a great name for men of all ages. If you have a Stephen in your life, he must certainly be gentle and kind, deserving an awesome nickname!

We understand that picking a nickname that resonates with your relationship with a person is a troublesome task. But you can lose your worries now because we have got you covered!

We have curated lists of cute, funny, cool, and unique nicknames for Stephen simplifying the process for you. Our short advice that accompanies each suggestion will further help you to make the right choice.

But before we look at the nicknames, let’s explore the tales around this lovely name!

Meaning and Origin of the Name Stephen

The name Stephen has its roots in the Greek name Stephanos meaning ‘crown’ or ‘wreath’, more precisely ‘that which surrounds’.

If we look at the Biblical reference, Saint Stephen was a deacon who was stoned to death, as told in Acts in the New Testament. It is on account of him, the first Christian martyr that the name is such a popular one.

Interestingly, Stephen was the name of kings of England, Serbia, and Poland, as well as ten popes. The number of royal men throughout the world and Olympic medalists named Stephen simply touches the sky.

Other influential personalities of the same name are the well-known physicist, Stephen Hawking (1942-2018) and the American author Stephen King who need no introduction.

Now that we are aware of all the prestige associated with the name since ancient times, let’s check out the treasure trove of nicknames for it!

A nickname should be such that it fills the heart and makes everyone go ‘aww’. This can happen only when you pick the cutest nickname for your loved one.

Here are a few cute nicknames for Stephen that you might want to consider.

Funny nicknames are the best as they rightly reflect how close two people are. And we’re sure that the Stephen in your life is special enough to deserve a thoughtful nickname that has a personal reference. Besides, who doesn’t like a witty sense of humor?

Here is an amusing amalgamation of funny nicknames for Stephen that will make everyone crack up a bit.

Cool nicknames are usually ones that boost the bearer’s confidence and show how likable he is. Thus, giving your family and friends cool nicknames will always make them happy.

Below is a list of cool nicknames for Stephen who might be as cool and carefree as these names suggest.

Stephen is a quite common name. But that doesn’t mean that the nicknames associated with it have to be run of the mill too. For someone who is special to you, a unique nickname is a must.

Here is a set of unique nicknames for someone called Stephen. Have a look and make your choice!

So, that was our extensive list of awesome nicknames for Stephen that might have helped you find the one that is perfect or inspired you to create one that matches his personality.

This curation of heart-touching nicknames contains the best ones from the lot and we hope you are able to wrap your head around the one that is perfect for your special Steve.

Don’t forget that nicknaming is all about having fun and picking a name that lights up the bearer’s face every time they hear it.

Finally, if you have any other nicknames that you think should be included in this list, then please don’t forget to let us know!