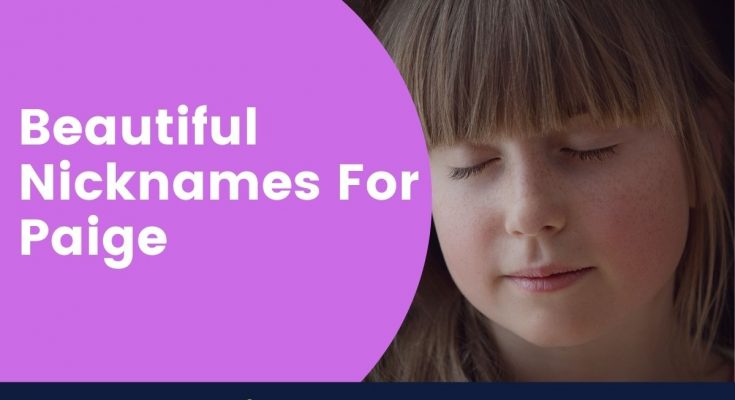 The most unique thing about the name Paige is that it’s gender-neutral but is generally used for females. Paige is an elegant name that’s not only pleasing to hear but also belongs to many famous persons.

You’ve come to the right place if you’re wanting to give a nickname to your special ‘Paige’ and don’t know which one is best suited.

In this article, we’ve managed to cover the most beautiful nicknames for the Paige in your life and not only that, we have helped you further by giving a little description of each of them, so you choose whichever you feel is better suited for her (or him)! All you have to do is go through this list and find the perfect one!

But before that, let us take a look at the origins of the name Paige.

Meaning and Origins of The Name Paige

The name Paige has Latin origins, from Byzantine “Pagius” meaning young helper, derived from the Greek word “Paidion” meaning child. In medieval households, a page was usually a young boy who was serving as his first step as a knight.

Since the middle of the 20th century, it has become a name given to girls, occasionally to boys as well. It is used as not the given name but also as the family name/surname.

It is a name popular in the US, England, Scotland, Ireland, New Zealand, and Australia. Without further ado, let us move to find the best nickname for your Paige!

If you really adore someone and want to call them by a name that makes them feel cute then this list of nicknames is curated specially for you!

There is nothing cuter than being given a cute nickname! Check out this list and find the best fit for your Paige!

You know what they say, it’s healthy to keep things light and funny for any relationship to work. This is your cue to choose a funny nickname for your Paige if you haven’t already! Check out the list of funny nicknames that we have complied with, just so you can make your relationship healthier with her.

If your Paige is cooler than you can ever be, but you need to act like you’re in the same league, then fret not, this list of cool + funny nicknames is at your rescue.

If during fights with your Paige, you don’t know how to let off some steam while not letting it get too heated between you and Paige, check out this list of slightly mean nicknames made just for you!

One of the best ways to show someone that they are special to you is by defining a unique relationship with them, and what better place to begin than giving them a unique nickname?

Check out this list and go and establish that special bond!

If we name every single celebrity named Paige out there, you won’t even be able to read all of them, since there are just so many! What can we say, the name is quite popular. How about we name a few?

Sportspersons include Paige the Wrestler, Paige Bueckers, Paige Lawrence, Paige Mackenzie, Paige Rini, among so many. There are many artists, singers, actresses named Paige, some of them are Paige Chua, Paige Davis, Paige Haley, Paige Hemmis, Paige Hurd, among many others.

There are several fictional characters named Paige as well, some of them include Paige Dineen, a character in Scorpion, Paige Matthews, the lead character on the American television series Charmed, Paige Tico, a character in the Star Wars sequel The Last Jedi, and so on.

The list is endless, but you get the popularity of the name.

With this, we have come to the end of this article. After a lot of deliberations, we have concluded the above list as the best one consisting of cute, funny, and creative nicknames for Paige.

We sincerely hope you pick the best-suited name for the Paige in your life, as the name of a person holds a huge part of their identity. Choose wisely!

If you have better suggestions, we are open to hearing them! Till then, the last pun: This Page ends here.