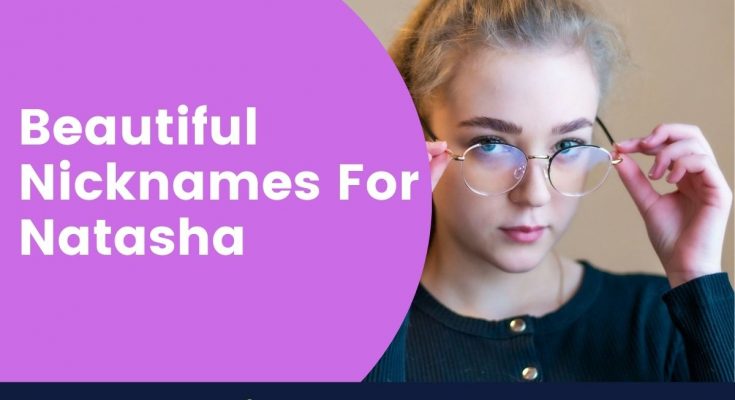 Refined, beautiful, and posh, the name Natasha effortlessly echoes these qualities for a woman who fancies a sophisticated identity. We love that it is a well-suited title for anyone girly and gentle, funny and charming, or spunky and tomboyish, and basically females with all kinds of distinctive personalities!

If you know someone named Natasha, then you must be familiar with what a delight it is to have her around. After all, with its elegant phonetic tonality, hearing this name almost feels as soothing as the sound of ocean waves hitting the shore.

A wonderful title like this deserves an equally wonderful nickname to go with it. This is why, in this article, we have shortlisted over 50 beautiful endearments for the lovely woman in your life.

Additionally, with each recommendation, we have taken the liberty to add a friendly description to help you reach your perfect one as swiftly as it can be!

But before getting started, let us first mull over the meaning of Natasha and get to know where it hails from.

Meaning And Origin Of Natasha

The female name Natasha bears a Russian origin and translates into “birthday of the Lord.” It is a diminutive of Natalya and first made its way across America during the post-Cold war.

Some of the most popular references of Natasha are Leo Tolstoy’s central character in his novel, War and Peace, and probably one of the most cherished characters on the silver screen and the Avengers universe, Natasha Romanoff.

Now that you’ve been introduced to the origin and meaning of this name, let us take you right through our list of over 50 excellent nickname recommendations for someone named Natasha.

How about choosing a pet name that has been well-received and admired by people over multi-folds of years?

Well, listed below are some of the most common (in a good way) and popular nicknames for someone bearing the name Natasha, so have a look:

If all you want to do is bring a smile to your beloved’s face by gifting her a nickname that she will treasure for life, then a cute one might just be the ticket for you! From the most eccentric options to the most “aww” inducing ones, we have a myriad of recommendations to make your job easier.

If the girl named Natasha in your life is blessed with an amazing sense of humor and knows how to entertain everyone with her escapades, then she probably deserves a funny nickname that makes her chuckle instead!

Scroll through some of the best comical moniker options that we have brainstormed for you to choose from:

A nickname well crafted is a nickname well kept! Yes, it is pretty much true, and this is why this round-up is all about introducing you to some of the most creative nicknames you can possibly imagine for the special lady who means the world to you.

Who said the nicknames you choose necessarily have to be a part of your own language? A great idea to set the Natasha in your life apart from the crowd is to offer her a marvelous Russian nickname that does all the talking, as she flaunts it among her peers.

Here are some of the best options on our list to get you started:

Want to take your nickname to the next level? We bet you do! Finding a unique nickname for Natasha might sure seem like a taxing job to do, but who says it has to be? With some of the most unheard-of and spectacular nicknames to choose from, we are here to make your nickname-finding expedition a lot easier.

So, this was all about over 50 beautiful nicknames for a woman named Natasha. We hope that our all-comprehensive list with some of the most inventive recommendations across the web has helped you find a moniker that the special woman in your life can resonate with.

In case you are yet to make a choice, then don’t hesitate to experiment with words and syllables and keep your thinking caps on until you come up with a perfect nickname for your special one!

Lastly, if there is another nickname that you want us to add to our list, then don’t forget to share it with us.