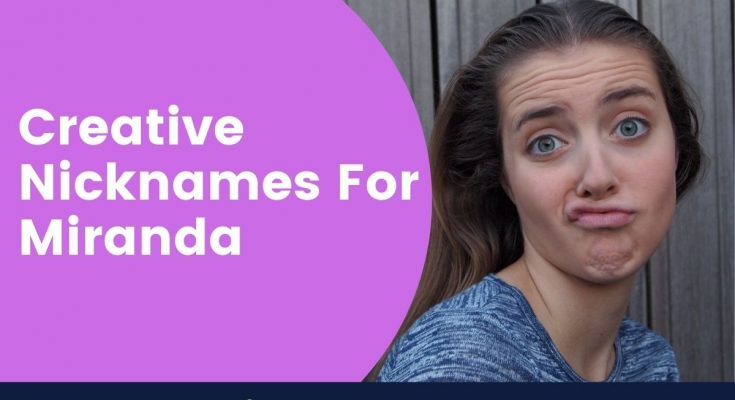 The name Miranda has remained an evergreen title for as long as we can remember. Classic, poetic, and glamorously splendid, this name is best known as one of Shakespeare’s most laudably invented titles that he gave to a bewitching young protagonist in The Tempest, his play.

Despite the fact that this name pioneered to some of the greatest heights during the 1960s, to this day, Miranda still continues to be a recommended option among a myriad of parents for their young girls—so much so as akin to the name Amanda!

On one hand, while several other age-old names sound pretty dated, Miranda has gracefully managed to cling to its primeval charm. Not overly used and picked ample times to carve its way among some of the best names for females, Miranda excels at hitting the right spot; and so stands true for women bearing this title!

If you know a special lady who rocks this name, then you would know that she simply can’t be described within just a few words. That’s where a fitting nickname comes into play. This is why, in this article, we have brainstormed some of the most creative nicknames for someone named Miranda, each of which is curated with a bolt of ingenuity and artistry for your beloved.

Additionally, we’ve taken the liberty to add our friendly advice of a description of all our recommendations, helping you pick the best jewel from our treasure.

But, before we drill right into our list of over 60 nickname suggestions for someone named Miranda, let us first familiarize ourselves with what this name actually means and where it hails from.

Meaning And Origin Of The Name Miranda

You must have heard several famous personalities flaunting this name, some of which include the singer Miranda Lambert; the American singer-songwriter, Miranda Cosgrove; an American actress, and Miranda Kerr, who is an Australian model.

From making a massive impression in films like The Devil Wears Prada and Sex And The City, the name Miranda aces both the fronts; the silver screen, and our real lives!

Miranda bears a Latin origin and translates into “to be wondered at.” Since the beginning of the Seventeenth century, this name has been used as a personal title for females in America and England. However, it was not until the Twentieth century that it garnered immense popularity among the ladies.

Now that you are clear about the meaning of the name Miranda and where it spawns from, let us head straight into our all-inclusive list of over 60 nicknames for all the special women bearing this name!

Every single name carries a set of nicknames that have gracefully stood the test of both, time and popularity, and Miranda is no different!

If you are looking for an endearment that isn’t strangely unusual, but not too conventional either and is loved by the crowd around, then a popular nickname might just be the ticket for you.

Below, we have shortlisted a few of the most widely-used recommendations for you, so have a look:

If the woman named Miranda in your life is a total cutie, then she probably deserves a similar nickname that accentuates all her adorable escapades.

A funny nickname always gets the job done on days you are looking to bring a smile to your special someone’s face. More so, you can always pick one of these as a way to hilariously come back at a friend you love teasing!

Below, we have listed some of the most comical monikers that are sure to crack up the special woman named Miranda in your life.

If the woman named Miranda you know is as cool as a cucumber and as relaxed as spring’s first breeze, then it’s best that you find her a similar nickname that’s synonymous with her aura.

From the coolest tweaks to this captivating name to some of the most spectacular renditions, our recommendations are sure to turn any woman into a diva!

In case the aforementioned nicknames haven’t struck a chord with your liking yet, we would like to interest you with some of the most unique endearments for the woman you hold dear to your heart!

Whether you’re searching for an exotic derivative or a witty moniker, our comprehensive list has the greatest options in store for you, so let’s get going:

So, this was all about over 60 striking nicknames for a lucky woman named Miranda. With its inventive expression and suave, this name continues to make waves and seamlessly stand out from the crowd!

We hope that our article has helped you find the nickname that resonates with the personality of your lady love or at least inspired you to curate one by yourself.

If there’s another nickname in your mind that’s worth adding to our list, then be a dear and make sure to let us know. Good luck!