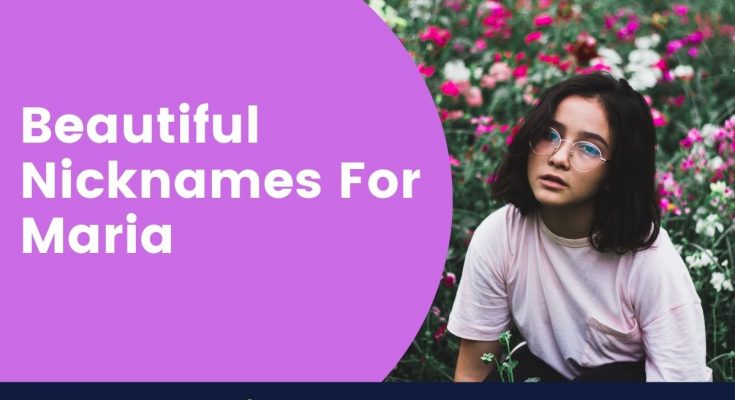 The name Maria is the perfect blend of sweet and savvy and is one of the most popular female names ever known. This moniker echoes femininity, and although to some, it might appear quite common, yet it’s an all-time classic!

Choosing a fitting nickname for someone with an already elegant name can sure seem like an arduous task if you are not equipped with the right options. Therefore, today, we have vetted some of the most beautiful nicknames for someone named Maria. To assist you even further in your nicknaming expedition, each of our options is accompanied by our two cents worth of opinion that will help you make the right choice.

But before we dive deep into over 50 nicknames for Maria, let us first explore what the name actually means and where it comes from.

Meaning And Origin Of The Name Maria

Being one of the most increasingly popular names for females across the globe, Maria is a Latin diminutive of the name Mary, which is derived from Miryām, a Hebrew name. This name is believed to hold the meaning “lady of the sea,” or “wished-for-child,” and bears biblical origins.

In fact, the earliest records of the name Maria are spawned from the New Testament of the Holy Bible. Another interesting fact about Maria is that ofttimes, it is also used as a middle name for males, as was the case in various Central European territories several years back.

Now that we know Maria a little better, let us head straight to some of the most endearing nicknames for this stunning name!

Such an adorable name like Maria deserves an equally cute nickname to go with it. If the Maria in your life is a sweet girl who spreads bouts of smiles around, there’s nothing better than gifting her a pet name that leaves her twinkling!

So, here are a few nicknames you can choose from:

The best part about choosing a funny nickname for someone you love is that it not just lightens the mood and leaves everyone giggling, but also helps you establish a stronger equation with the person you are searching nicknames for.

If you are in the mood for a chuckle-worthy nicknaming session, then have a look at these comical nicknames for someone named Maria:

In the Russian tradition, names are quite a big deal. Since most of the Russian names are ridiculously long, (Take Leo Tolstoy’s name, for example, whose original name is Lev Nikolayevhich Tolstoy) therefore, these nicknames or diminutives are used to communicate between two people to reduce confusion.

If you have a knack for such nicknames and want to pick a Russian pet name for the Maria in your life, then look no further than this list:

Quite a funny point of confusion for non-native speakers are nicknames that hail from Mexico. Despite the fact that even English pet names possess different variations for their names, in Spanish, it’s not a piece of cake to always identify the relationship between the nickname and the name.

Thus, if the Maria in your life is a Mexican, here are the list of options you can choose from:

Whether you are simply in awe of the way Italian nicknames have you roll off your tongue or know a Maria with Italian roots, the web is brimming with choices to nickname your beloved. Just like several other romance languages, Italian nicknames either originate in Latin or might be Latinized variants derived from other languages.

So, today, we have picked the best Italian nicknames for someone named Maria. Have a look:

So, this was all about some of the most beautiful and chicest nicknames for someone named Maria. Did you know that research claims that using pet names for someone in your life is a sign that your relationship with them is strong?

Well, now you are armed with the greatest options to gift a term of endearment to your loved one! We hope that our list helped you find just the right title to call out the Maria in your life.

In case you are feeling creative and come up with another fantastic nickname, then don’t forget to let us know because sharing is caring!