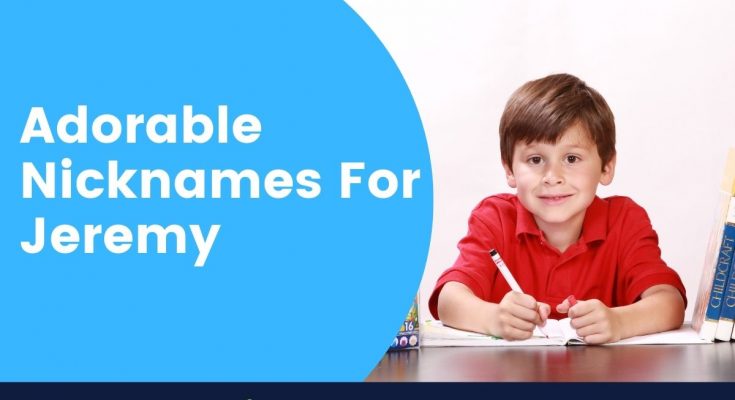 A charming name, Jeremy is the perfect match for a little boy, right at home on a curious kid on the go! This name echoes fun, thrill, and reiterates a personality that’s always willing to discover more. When you come to think of it, Jeremy appears like a pretty solid name for the adult world. Moreover, it also offers a range of some seriously adorable nicknames, which is an added cherry on top!

This name might sure carry ancient roots, but luckily, it is not at all outdated and remains fresh in both—spirit and sound! If you have someone named Jeremy in your life and you’re looking for a cute nickname to call that person out, you know how baffling the wide range of options might make it for you.

That is why, today, we have handpicked some of the best endearments for Jeremy that we love, and know that you will too! Also, each nickname accompanies our free advice to catalyze your nicknaming journey.

But before we kickstart with over 50 great nicknames for Jeremy, let us first get to know a little about the background of this name, what it means, and where it hails from.

Meaning and Origin of the Name Jeremy

Jeremy has been widely accepted in several parts of the world today. In fact, this name stood as the 84th most famous name for young boys in the United States in the year 2000. What’s interesting to know is that more recently, in 2018, Jeremy was the 204th most sought-after title for men.

It is a masculine name that hails from Hebrew origin, and means “appointed by God.” Some of its other meanings are, “Exalted of the Lord,” “The Lord loosens,” “May Jehovah exalt,” or “God will unloosen.”

Etymologically, the name Jeremy is an English diminutive of the biblical title Jeremiah, an anglicized form. This name is also recorded in the Christian New Testament’s verses Matthew 27:9 and verses Matthew 2:17 in translations of King James’ translated version.

Now that we are familiar with the meaning and roots of Jeremy, let us head straight to some of the best nicknames for the name!

If you have a Jeremy in your life who is as cute as a button, then he probably deserves an even cuter nickname that best suits his personality.

Not only do cute nicknames sound sweet to the ears, but they also help you bond well with the person you love. Here are a few admirable options we love and think that you will too!

A funny nickname is a great way to get your point across, isn’t it? Although it can appear somewhat crude and rude, yet it somehow is socially acceptable! Possibly not for the person you’re looking a nickname for, but you are sure to get some chuckles out of others when they first hear a whimsical pet name!

Thus, if you intend to get a good laugh and lighten the air, have a look at some of the most comical nicknames for someone named Jeremy:

Do you have a special guy named Jeremy in your life whom you are searching a delightful nickname for?

Well, your search ends here because we have brainstormed some of the greatest-of-all-times pet names for your boyfriend that will make you go from “Oh,” to “Aww!” real quick! Have a look:

The more unique a nickname, the more attention it is sure to grab whenever someone catches wind of it. After scrolling through heaps of the same-old pet names for Jeremy, a list of unique nicknames will seem like a breath of fresh air!

If you are looking for a unique nickname that creates a remarkable statement wherever the Jeremy in your life heads, then look no further than this list:

This was all about over 50 adorable nicknames for a male named Jeremy. Whether you choose to go for a cute pet name or a funny one, what matters is how much you enjoy the process! Pro tip: As much as you would love gifting the perfect nickname to the Jeremy in your life, don’t fret much about it.

As long as you choose an endearment wholeheartedly, they are going to love it! Lastly, if there is any nickname that you think would be a good fit, then be a dear and make sure to share it with us.