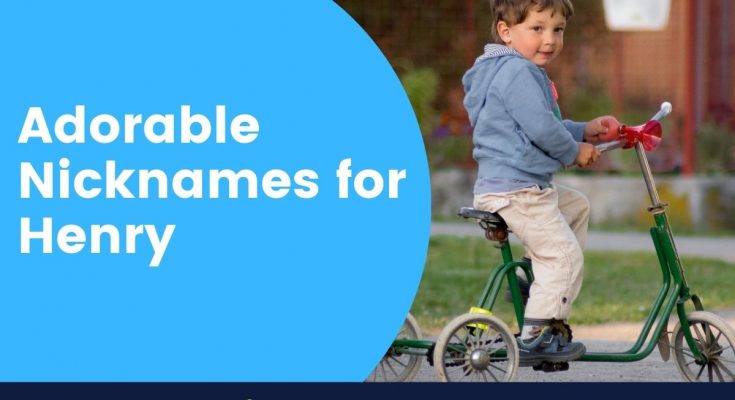 Henry – A name that oozes out enthusiasm and fills both the caller and the listeners with a fuzzy feeling of joy. It is a name that aged gracefully, in every sense of the word, and is like a precious antique that is as admirable and heart-warming as it was years ago.

Coated with velvety vintage vibes, along with a vibrant spray of urbanity, Henry is the name that owns our stage today.

If we are guessing it right, you are looking for a fitting nickname for a loved one who goes by this name, aren’t you?

Well, by the end of this, you will have quite a few good ones to choose from. After all, we have plenty of options, and that too, sectioned into different types of nicknames. This will make it uber easy for you to hunt for the kind of pet names you want for Henry.

Before we begin rummaging through the nicknames, let’s gather some exciting information on the name Henry.

Meaning and Origin of Henry

The name comprises two parts: ‘Heim,’ which means home, and ‘Ric,’ which means ruler. Interestingly, Henry is also quite common as a surname in Ireland and France.

The roots of the name are relatively blurry. While it is most often traced back to French and German origins, the exact etymology of the name is quite debated. As Henry is typically a masculine name, female variants like Harriet and Henrietta are generally picked by parents who want to name a baby girl.

If we look through history, we find that Henry is a rather noble name. The name and its variants have been bestowed upon several kings and aristocrats across Europe. It was initially introduced to England by the Normans, where it was subsequently given to eight kings.

The most well-known of these rulers have to be Henry VIII, an extremely controversial King of England. Records say that he had six wives, and he beheaded two because they couldn’t have sons for him.

Other popular faces who go by the name Henry are – Henry Cavill, a British actor, Henry Kissinger, an American diplomat, and the famous American industrialist – Henry Ford, among many others.

Call Henry by any of the following names, and he will want to hug you. Yes, we are that sure because these sugar-filled, warm, and mushy nicknames can make even the toughest people feel overwhelmed.

So, if you want to shower your special person with love, then you have to get a glimpse of this list of cute nicknames for Henry.

If you wish to play safe and not put much thought into deciding on a nickname, then you go for any of the below-stated pet names with your eyes shut.

These are the names that have no layers and are simply a friendly and lovable way to call Henry.

Go through the list and see if we have something for your Henry here.

A cool nickname is a great trick to get a favor out of someone. It butters up the person just right to make them feel amazing about themselves and, in turn, about you too.

So, they will never say no to helping you out when you call them by a spirited nickname.

If you have similar intentions with Henry, then you should definitely check out the following pile of nicknames.

It’s time for some crazy nicknames! If you are someone who is associated with fun and humor, then level up your game with these impressively funny nicknames for Henry.

These insane monikers will not only make Henry but the others laugh too. However, if Henry is not a sporty soul, then be careful and make sure you don’t mock him.

So, read on and dig out whatever you think is the best!

Do you think Henry would like to be called by a creative and colorful nickname instead of the predictable ones?

Well, the only way to find out is to call him by one of the below-mentioned nicknames. These nutty names will amaze you and will surely make you pick one for Henry.

Have a glance at them and let us know what you liked the most!

Ditch the regular nicknames for something new and unexpected. Call your dear Henry by a nickname that no one would ever call, and that way, he will always remember you as someone cool, exciting, and loving.

Below is a list of unique nicknames that will take Henry by surprise and give you an ever-lasting relationship.

Go ahead and pick your favorite!

And here, we shut the box of beautiful nicknames for Henry. We hope you choose to call Henry by these names and remind him through these endearments that he is loved, respected, and cared for. As much as we hope that our round-up of pet names resonates with you, we wish you and Henry a fulfilling and thrilling relationship.

Now, if all these nicknames have kindled a spirit in you to create your own nickname for Henry, then you can easily do so by keeping his habits and characteristics and the nature of your relationship in mind.

Lastly, in case you have any recommendations that can be added to our collection of nicknames for Henry, then do send it our way!