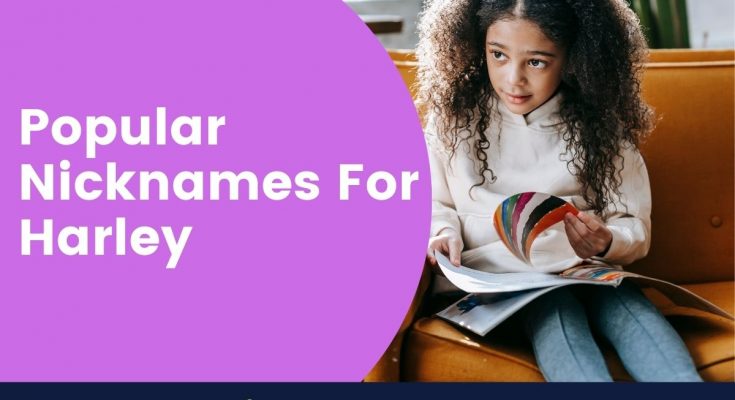 Today, we decided to pick another chit from the jar of names for our next round of nicknames. And what did we get? Harley! If you have been waiting for this lovely name to pop up on our board, then your wait has come to an end. In this article, you’ll find more than fifty interesting nicknames for Harley. That too, with a super helpful description attached to each of them.

One of the rare unisex names that suit guys and girls equally well, Harley is a beautiful blend of that old-world charm and cosmopolitan crispness. If you have a loved one called Harley, he or she would probably be someone who stands out for their high spirit, confident conversations, and the zeal to indulge in new experiences.

We are sure you treasure this person and giving them a nickname will make both your hearts feel so full. So, stay with us while we explore some spectacular nicknames for both girls and boys named Harley.

Meaning and Origin of Harley

The name Harley is of English origin and is used mostly in English-speaking countries but also in a few other countries and languages of the world.

Having roots in present-day Scotland, specifically, Shropshire and West Yorkshire, Harley comprises the Old English word ‘hær’ which means ‘rock’, ‘heap of stones’ or ‘hara’ i.e. ‘hare’, and ‘lēah’ which means ‘wood’, ‘clearing’. In some cases, the name may be topographic. Some more concrete meanings that are deferred from this are ‘woodland’, ‘clearing’, and ‘spacious meadow’.

The name also has some history in Ireland. When not of English origin, this is an Anglicized form of ‘Gaelic Ó hEart haile’ which translates to ‘descendant of Earghal’. In this light, it can be considered as a variant of the personal name ‘Fearghal’ without the initial F.

Harley has been popular as a masculine name since 1880. However, as a feminine name, it made a breakthrough in 1990, and today, it is slightly more popular as a feminine name. Some well-known people who go by this name are Harley Parnell Hisner, a baseball player, Harley Venton, a T.V. actor, and Harley Allen, a country singer, and songwriter.

Now, let’s wrap up this knowledge fest and go straight for the nicknames!

Keep the drama aside and go for these classic common nicknames which are simple and fun at the same time. You won’t have to think much about these as each of them is extremely flexible and will suit almost anyone.

So, gear up and begin with your search now!

Is Harley someone who doesn’t let your eyes go anywhere else but herself/himself? If yes, then this admirable cuteness deserves to have an equally cute nickname.

We have tried to gather some roly-poly names and hope you find the perfect one for your bunny.

For some people, nicknames are synonymous with humor and leg-pulling. If you are one of those, then the bundle of nicknames that follows is tailored for you. Call Harley by these names and you will certainly hear some hearty laughs.

Read on to get hold of one!

If Harley is someone who everyone, or at least you, look up to, then what he needs right now is a cool nickname. And we already have an extensive list ready!

You just have to go through it and pick the one that makes them feel like a winner.

We know that your relationship with Harley is unique and so should be the nickname that you give him/her. We have curated a bunch of out-of-the-box nicknames for Harley that might help you here.

Just try calling them by any of these and they won’t stop smiling!

Looking forward to them, we will now sign off!

See you next time!