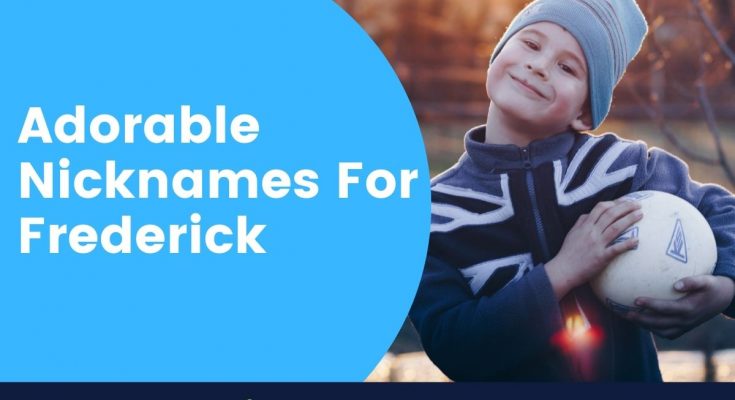 Despite the fact that some people might find it a little too old-fashioned for today’s taste, the sophisticated tone of the name Frederick is exactly what sets it apart from the crowd. A timeless classic and ever so confident, it would be safe to say that this title is an all-rounder winner among the deluge of name options for boys.

If a special guy in your life bears this name, then you already know what a treat it is to have him around. In case you are planning to surprise him with an equally fabulous nickname that serves as a testimony to how dear he is to you, then this post is for you.

In this article, we plan on introducing you to some of the most awesome and trendy pet names for someone named Frederick!

Additionally, each of our recommendations accompanies our friendly word of advice so that your nickname-finding journey is as breezy as we intend for it to be!

However, before getting started, let us first familiarize you with the meaning of Frederick, and where it hails from.

Meaning And Origin Of The Name Frederick

The name Frederick is a masculine title that bears a Germanic origin and translates into “peaceful ruler.” It is derived from the words Frid, which means “peace,” and Ric, meaning “mighty,” or “ruler.”

An age-old staple across various Germanic-speaking territories, this name was borne by some of the most notable rulers of all time, including Frederick I Barbossa, who was a 12th Century crusader and Holy Roman Emperor, and Frederick II of the 18th Century Prussia.

You would be thrilled to know that this name made it to the Top 100 list of names during 1880 and 1957 in the United States. In fact, in 2007, Frederick was acclaimed as the 99th most popular title for males across Wales and England. Despite its modest decline thereafter, this name has made a ravishing entry in all its glory!

We love the fact that while Frederick is quite a powerful and iconic name for men, it also flaunts a remarkable yin-yang quality with twofold meanings of peace and power.

Now that we have acquainted you with this wonderful name, it’s time to let you unearth over 50 great pet names for your special guy, Frederick! Without further ado, let’s get going.

If the guy named Frederick in your life is a major top dog and loves socializing with people, then it is best that you gift him a popular nickname that helps him dazzle in the crowd!

Below, we have listed some of the most tried and tested monikers for you to pick from, so have a look:

A cute nickname is like an all-in-one package that is sure to make your loved one feel lucky and loved. If you are planning to bring a wide smile to the face of the person who lightens your life like a glowing ball, then no other option beats an adorable endearment.

Listed below are some of our favorite recommendations for you to pick from, so read on:

If the guy named Frederick in your life loves cracking you up with his jokes and is blessed with an awesome sense of humor, then he would appreciate you lovingly teasing him with a hilarious nickname!

From the craziest to the quirkiest ones in town, our collection is sure to get you all rolling with a comical nickname for your man. Have a look:

There is no denying the fact that cool nicknames are somewhat hard to find. This is exactly why we have done all the legwork for you, leaving you with a bunch of the sassiest monikers for the man who means the world to you.

Some are adorable, some are silly, and some are downright funny! Whatever it ultimately is, nicknames are the most thoughtful way of expressing your affection for someone who holds a special place in your life.

While we are at it, why not scroll through some of the most creative pet names of all time for a guy named Frederick? Here are the options:

So, this was all about over 50 adorable nicknames for a man named Frederick. Our birth names might sure be steeped and debated with culture, tradition, and our background. But, the deal with pet names is that they are earnestly conferred with a dash of artistry to remind the special people in our life that they are loved and cared for.

We hope that our round-up of endearments has helped you find the one that resonates with your loved one or at least fuelled you to curate a nickname of your own. If you still feel under a slump, then a great idea is to pick their habits or their unique attributes, thereby tweaking them to offer them a personalized identity!

Lastly, in case you have another great recommendation that is worth adding to our list, then be a sport and help us expand our database. Break a leg!