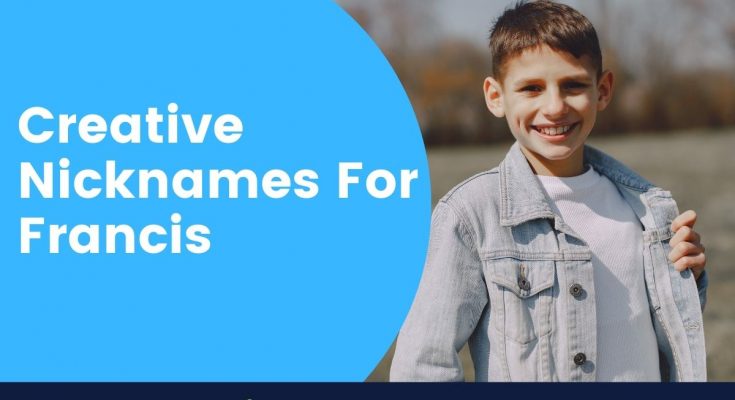 Adopted by the current pope, the name Francis sounds like a bountiful of positivity, goodness, and divinity. Hearing the name, one’s mind goes to a boy who is calm and controlled, carrying a saintly smile and peace on his face.

If you also have someone so pure who you absolutely adore named Francis, then it’s time to brighten up their face with a smile! And that you will do by giving them a new nickname. The one that ornaments their personality and your relationship with them.

To carry out this exciting task, we have stocked up all that you need. From common nicknames to those creative ones, we are going to give you a broad range of choices to pick from. After all, your dear Francis deserves a one-of-a-kind nickname, doesn’t he?

So, get ready to surf through nicknames and look out for the friendly notes of advice that we have shared with each nickname.

But before we go out for the names, let’s halt to read some facts and beliefs about the name Francis.

Meaning and Origin of Francis

The English first name ‘Francis’ probably has roots lying in the Old French ‘Franceis,’ Latin ‘Franciscus,’ or Italian ‘Francisco.’ In its most initial form, it might have been an ethnic name meaning ‘Frank’ and hence, ‘Frenchman’.

It became massively popular as a personal name during the Middle Ages given the fame of St. Francis of Assisi, whose baptismal name was actually Giovanni but was later known as Francisco because his father was absent in France at the time of his birth. Several European languages have contributed to the development of this American family name.

Another meaning of the name is ‘free’ which makes its use androgynous. However, Frances is generally used for girls and Francis for boys.

Now that we are familiar with the meaning and origin of Francis, let’s get going with the nicknames!

The list below is filled with nicknames for Francis that have passed the test of time and managed to retain their position amongst the favorites. You can call Francis by any of these names to break the ice with him. So, go ahead and choose one right away!

If Francis makes you go ‘awww’ every time he does something sweet or silly, then this heart-melter deserves the cutest nickname. To find one, just go through the following bunch of nicknames and pick what suits your jelly bean the best!

Being around for a while now, popular nicknames certainly have an upper hand over the others. These may be just shorter and easier versions of the original name, but hold a lot of feelings for the bearer.

As far as Francis is concerned, we have a beautiful set of some of the most popular nicknames for him. So, check it out and get your hands on the best!

Having fun is our top priority here. And creativity is intelligence having fun. That’s what Albert Einstein said! So, let’s work up our creative sides a bit and churn out some awesome nicknames for Francis that are never heard of before.

Glance through the list and let us know which one clicked with you!

Signifying style and hipness, the following stack of nicknames will make Francis stand out. Just go for the one that sounds effortless and blends well with his personality. After all, Rick Owens says, ‘The coolest thing is when you don’t care about being cool.’

Now that you have gone through our compilation of more than 60 nicknames for Francis, do not let the day pass without choosing a lovely nickname for that special guy. Always remember life is all about these little joys, and giving someone a nickname is undoubtedly one of them.

If our blog has inspired you to weave a new nickname for Francis, then we are all ears. Please do share your creative nickname ideas with us.

We’ll be back with more interesting nicknames for your loved ones soon. Until then, happy nicknaming!