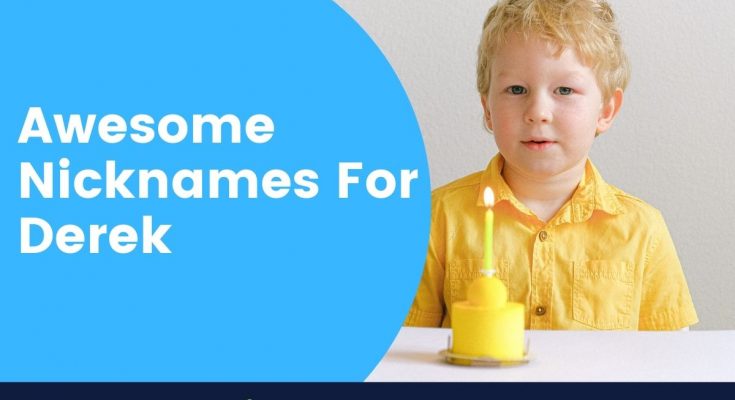 The name Derek is unquestionably one of the most masculine and powerful titles for males across the globe. It represents vigor and strength, two attributes that offer it a dynamic aura and set it apart from those flowery gentle-sounding names that not most people are game for.

Although this name might seem a tad bit conventional, believe you us, it is anything but ordinary, and there cannot possibly be a bigger testimony to this fact than its increasing popularity!

Whether it’s a brother, best friend, or boyfriend, deep down we all need a Derek in our lives! So, if you are lucky enough to have one, then a great way to make him feel special and loved is to pick a wonderful nickname that fits him as if it was meant exactly for him.

This is why, in this article, we have handpicked over 50 awesome nicknames for a man bearing this name. Additionally, each of our recommendations is packed with our friendly word of advice and a brief description so that your journey is as troublefree and rewarding as a walk in the park!

But, before diving into our list of nicknames for the name Derek, let us first explore what this name means and where it spawns from. Keep reading!

Meaning and Origin of the Name ‘Derek’

If you are a major Yankees fan, then you would probably agree that the greatest-of-all-time Derek Jeter has a lot to do with the evergreen popularity of this title!

This Old German name translates into “power of the tribe,” or “people ruler,” and first made a debut during the Middle Ages across England when it was brought into the spotlight by immigrant Flemish weavers and cloth traders.

The name Derek is known to have been derived from Thiudoreiks, an Old Germanic title that is now almost obsolete. It made its way into the Top 100 list and retained its popularity across the United States for whopping 25 years.

Now that we are familiar with the meaning and origin of the name Derek, let us head straight into over 50 stellar nicknames for you to choose from.

For those who like keeping it simplistic, picking a popular nickname that is well received by the people around is always a great idea. This is why we have compiled some of the most commonly used pet names for the guy named Derek in your life.

Each of our contenders has stayed true to the original name for years, which means that choosing one of these would definitely give you a greater edge over the others. So, have a look:

Whether you want to flatter your special man, or just give him a reason to brim with a wide smile, a cute pet name for him might just be the ticket for you! Quirky, eccentric, and adorable, name it and you will find the perfect one on our round-up of some of the most delightful monikers for a man named Derek. Take a look:

While you are at it, you might as well pick a funny nickname that induces bouts of laughter and makes you chuckle for years to come! We love the idea of adding a flair of comedy to the moniker you select for the man you share a special bond with.

So, below, we have listed some of the most hilarious recommendations for Derek that will leave you giggling! Keep reading:

If your loving man doesn’t mind some attention, then he would definitely appreciate a cool nickname coming his way. A breezy and easygoing pet name makes the perfect addition to someone’s identity, so scroll through some of the greatest pet name recommendations that we have shortlisted for you to choose from:

What’s the point of indulging in hours of surfing on the web if your chosen nickname is not as unique as the special guy in your life? Well, if you are looking for one, then your search ends here!

Below, we have listed some of the most extraordinary pet name recommendations for someone named Derek, so read on and get going with the one that strikes a chord with you:

So, this was all about over 50 awesome pet names for a man named Derek. Gifting a wonderful nickname to someone dear to your heart can just be the best gesture to remind them that they are loved and cherished.

We hope that our round-up of some of the greatest moniker recommendations has helped you find the one that fits your guy like a glove, or at least inspired you to come up with one of your own. In case you still made a decision yet, then a nice idea is to simply describe their most prominent personality trait or a unique physical attribute.

Lastly, if you have another epic nickname in mind that you believe is worth adding to our list, then be a sport and help us expand our database by sharing it with us. Good luck!