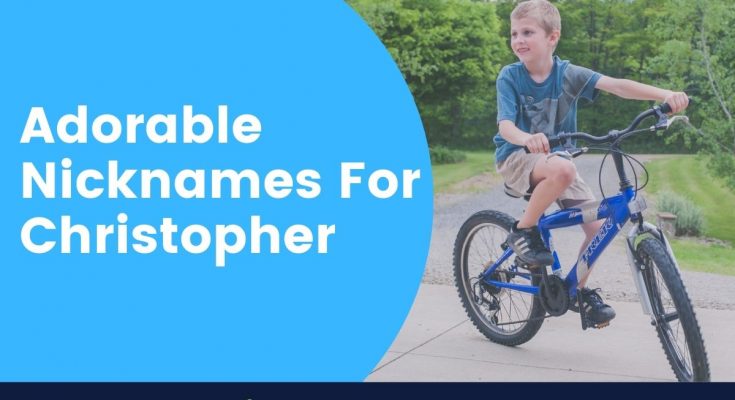 Christopher is one of the classiest names known to us today. It is gentle yet strong and has an amazing vibe to it. I’m sure we’ve all known or been friends with at least one Christopher in our lives, and surprisingly, they always turn out to be the best kind of people!

Whether Christopher is your buddy, boyfriend, son, or just someone special, giving him the perfect nickname can make your bond much stronger. This is because nicknames are nothing but a sweet way to express love and affection. It’s like your own little love language!

However, picking the right nickname is not an easy task. You need to ensure that the name fits right to their personality and is adored by them. I mean, there’s no point in giving them a nickname they don’t like in the first place. Sadly, this can cause a lot of confusion.

But don’t worry, we’ve got you! In this article, we’ll be mentioning some of the coolest, trendiest, and the most adorable nicknames for Christopher. Trust me, you’d use them so often that you’d almost forget what calling them by their actual name feels like.

The best part? You can switch from cute nicknames to funny and weird ones whenever you like. And in case you feel confused between two good ones, you can always refer to our opinion on the given name and choose the one that fits perfectly.

But before we give you the nicknames you’re looking for, let’s understand the meaning of Christopher and where it hails from.

Meaning And Origin Of The Name Christopher

The name Christopher can be traced back to the 15th century and has a religious touch to it.

It is derived from the Greek name Christóforos, which means the “Christ-bearer” or “the one who bears Christ.” Back then, people who followed the Christian faith used this name to express their love for Jesus Christ and how they carry him in their hearts.

There’s also a legend that says that there lived a man named Reprobus who used to help the weak and poor cross the river. One day, he carried a child on his shoulder who wanted to cross the river, and surprisingly, his weight kept getting heavier.

When questioned, the child revealed that he was, in fact, Jesus Christ, and the weight on Reprobus’s shoulders was the weight of the world. Thus, everyone rejoiced and the man was given the name Christopher.

Christopher has been a widely used name in the United States and the United Kingdom ever since the 1950s. Although its craze has died down recently, it is still a pretty good choice for parents who want to go for a fairly known name rather than choosing something extremely popular for their child.

Now that we’re familiar with the history, you can scroll down to find some incredible nicknames for Christopher!

What’s better than expressing your love by giving him cute nicknames?

Check out the list of cute names for Christopher, pick your favorite one, and show him how much you care. Our personal favorite is Number 11!

Make every moment full of smiles, laughter, and giggles by giving him a comical nickname. If you’re looking for funny names for Christopher, here’s your best list.

Boys named Christopher are always the talk of the town, so you need to ensure that your nickname is class apart too. Below are a few listed options for popular nicknames for the popular guy!

He deserves a name that’s extraordinary, out-of-the-box, and absolutely spectacular! What’s the point of calling him by a name that’s common?

Take a look at these creative and unique nicknames for Christopher.

And that’s a wrap! These were our top picks for adorable and cool nicknames for Christopher. You can pick the best one out of all or choose one from each and use it as per your changing moods.

Either way, we hope that you’ve found the perfect name(s) or at least are now close to it. If not, you can quickly go through the list again and craft your own nickname. If you got one on your mind already, do remember to share it with us in the comments! We’d love to know.

Thanks for reading. Happy nicknaming!