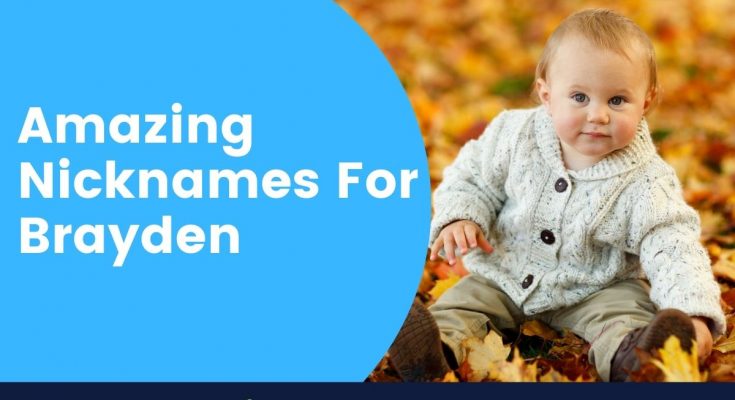 Brayden is the Americanised rendition of the name Braden and runs among some of the most inventive titles for males. This name is a smart option with classic star power, and this makes it refreshing for a young boy and yet, a perfect cut out for a grown-up! This one appears to be a rich asset of the “-ayden” family, which also houses names like Jayden and Hayden. Brayden, however, reaches the pinnacle of turning into a fashionable classic.

If you are looking for a suitable nickname for a special guy named Brayden in your life, then your search ends here! In this article, we have handpicked over 40 amazing endearments, along with a friendly description of each option so that you pick the best one!

But before getting started, let us first understand the meaning of Brayden and where it hails from.

Meaning And Origin Of Brayden

The name Brayden bears an Irish origin, spawning from the Gaelic word “bradán,” which translates into “salmon.” In the old days, a plethora of Irish names were culled from animal titles. For instance, Madden meant “little dog,” and Conor meant “hound lover.”

Celtic mythology offered massive importance to the transformation of animal forms to humans. It was often believed that the bearer of such a name would inherit the same powers that the animal possessed. The salmon, synonymous with Braydon, boasted various capabilities, including respect and wisdom in the Celtic world.

In 2008, Melissa Joan Hart gave this name to her son. The rugged and full-flavored appeal of Brayden makes it a fresh choice for many athletes, especially Canadian hockey players. It is often cheered for in football fields and ice rinks as well!

Now that we are familiar with this name, let us jump straight to some of the most fantastic pet names for Brayden.

You have to walk a very fine line when it comes to choosing a common nickname for your special guy. While it shouldn’t be anything close to bearing the “ordinary” tag, it should definitely be something that gives an impression of the original name to the hearer.

So, below, we have listed some of the most popularly known, yet fabulous endearments for a guy named Brayden. Have a look:

Sometimes, even the littlest of ways can magically express your love and affection for a person who matters. Even better, a cute nickname will definitely leave your special guy blushing whenever he is lovingly called out!

So, if you are up for finding an adorable endearment for Brayden, then look no further than this list:

A hilariously funny nickname is sure to induce bouts of laughter even on days when the Brayden in your life feels slumped. If you intend to astound, tease, and make your special man smile, then scroll through some of the most comical pet names that we have listed below for you:

Nicknames come in all shapes and forms, but only the coolest ones deserve to catch attention whenever someone comes to hear of them. If the guy named Brayden in your life is loved for his fantastic and captivating personality, then listed below are some similar nickname options that will leave you stupefied! Check them out:

So, this was all about some of the most awesome nicknames for a guy named Brayden. Pet names serve as a powerful asset to strengthen your bond with someone whom you hold dear to your heart.

These terms of endearments express your honest affection and always spread smiles. We hope that our article has armed you with all the great options you can pick from, or at least inspired you to curate a moniker of your own!

Lastly, if you have another fitting nickname in mind that is worth adding to our list, then be a dear and do share it with us! Happy Nicknaming!