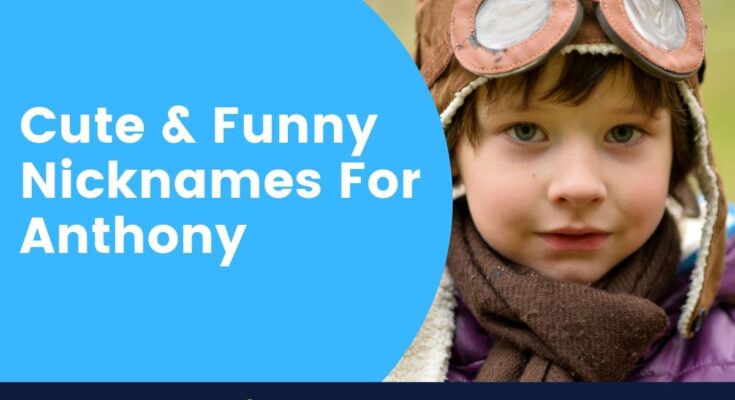 Although the name Anthony has been on the decline among boy names for the past few years, it still charts highly due to its distinctiveness. In fact, it has been an American baby’s staple moniker since people began tracking names back in the 1900s.

Anthony bears quite an interesting history dotted with impressive characters and figures, varying from the acclaimed celebrity Anthony Hopkins, to general Mark Antony.

We know that finding the perfect nicknames that suit one’s personality can be an exciting task. We also know that with so many options flooding the web, it can turn into an arduous chore.

Therefore, today, we have put together some of the cutest and most whimsical nicknames for someone named Anthony that we’re sure, you will be in absolute awe of!

Whether it is a family member, a lover, a new pet, a best friend, or even yourself to pick a nickname for, each option that we mention is accompanied by our opinion to help you make the right choice!

But, before we head to the list of nicknames for Anthony, let us first explore what this name really means and where it hails from.

Meaning And Origin Of The Name Anthony

Anthony is a masculine name that is a derivative of Antonius or Antonii, an ancient Roman family name carrying an unknown etymology. This name is translated as “of inestimable worth,” and “priceless.”

In the 17th century, the name Anthony was broadly associated with the word “Anthos,” a Greek word that typically means “flower.” Today, this Christian name has grown multifold in terms of popularity, especially in countries such as the United States of America.

This name bears a Latin origin, wherein Anthony was deemed “to be highly praiseworthy.” A name common among saints, it has been used in various languages for males.

We believe that an excellent way to start your research for nicknames for Anthony is by beginning with a list of adorable names.

This is because cute nicknames are sure to be loved by people and steal their attention in a moment!

So, if you want to go for something heartwarming, here are some of the cutest nicknames for Anthony that will get you smiling.

If the loved one you’re searching nicknames for can hold your deepest secrets and cheer you up when you’re down, you should at least get them a notable nickname!

A funny title is an excellent way of lightening the mood and enjoy every moment you spend with that person.

Whether you wish to take up a funny word related to their name, or something that echoes their personality, here are some of the most comical nicknames for Anthony:

As much fun as it’s keeping a hysterically embarrassing nickname for your beloved, getting them a cool one also sounds like a great idea!

They can flaunt it wherever they go, and they’d love you even more for gifting them the nickname they love.

If you are finding a cool endearment that creates sparks whenever heard, then look no further than this list:

If you still want to have harmless fun and get them a nickname that leaves the Anthony in your life blushing, here are a few super embarrassing nicknames to choose from:

Well, now you need some cute nicknames that match both; your boyfriend’s name and personality.

Moreover, what better way to tell your partner that you love them? Find a cute and unique nickname for Anthony and get going!

Let’s be honest, there’s nobody in this world who doesn’t love a unique personality, say, someone like Sheldon Cooper from The Big Bang Theory!

On top of it, a one-of-its-own-kind nickname to match one’s persona is an added cherry on top!

So, listed below are some marvelously distinctive nicknames for someone named Anthony. Have a look:

Remember, it’s not just about settling on the perfect nickname, but also about enjoying the process!

We hope our compilation of endearments has helped you choose the one that strikes a chord with your heart. If you can think of some more nicknames for Anthony, then make sure to enlighten us!

70+ Cute and Funny Nicknames for Tyler