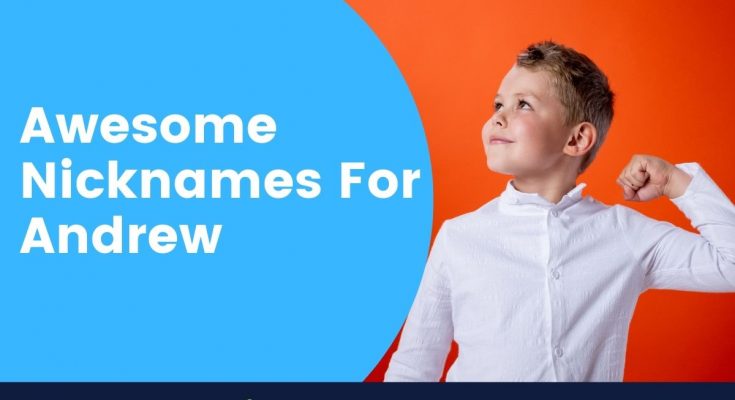 The name Andrew stands among some of the classiest and most appealing titles for boys, adding an incredible character and charm to any personality. From Andrew Garfield to Prince Andrew, the Duke of York, this name has stretched its way through some of the most popular personalities in the world.

However, despite the prominence of this name, finding a great nickname for Andrew might not be as easy as it appears, which is why, today, we have handpicked over 100 awesome pet names for the special guy in your life! Additionally, each nickname accompanies our friendly advice so that you make the right choice.

But before we scroll through our list of the best nicknames for Andrew, let us first explore the meaning and origin of the name.

Meaning And Origin Of The Name Andrew

Andrew is a famous English name that is taken from the Greek term Ἀνδρέας, Andreas. It usually translates into “strong,” “manly,” “brave,” “warrior,” and “courageous.” This name, in the New Testament, was one of the twelve apostles of Jesus, and also the first disciple to be called by him. Although the major origin of Andrew is Greek, yet, this name was also taken by the patron saint of Russia, Greece, and Scotland.

Despite the fact that Andrew slipped a little and dropped out of the Top 20 names in 2013, it firmly found its way back among the Top 10 names in the past two decades. In fact, Stanley Liberson, a sociologist researcher revealed that Andrew was the leading male’s name which was picked by highly educated parents of a boy.

Now that we know the meaning of Andrew and where it hails from, let us head straight to our list of over 100 nicknames for the stellar name!

Does the special guy named Andrew in your life deserve a pet name that is ultra-sweet and adorable? Are you looking for a nickname that he might even be embarrassed about whenever he is around his boys or his crush?

Have a look at some of the most delightful nicknames for Andrew:

If the Andrew in your life is gifted with a great sense of humor and loves some fun, then it is a great idea to go for some quirky, whimsical nicknames that bring an air of laughter whenever they are heard.

The best part about picking a popular nickname for someone you love is that there’s always a guarantee that you won’t go wrong with it!

Glance through some of the most commonly-used pet names for a guy named Andrew:

The closer you are to a person, the crazier you can go when it comes to keeping a nickname for them.

If you are all game for some of the weirdest nicknames for someone named Andrew, then look no further than this list:

No matter how painfully annoying the guy named Andrew in your life might be, he deserves a nickname.

However, the fun part is that as much as nicknames are a kind of endearment, they can also be treated as an instrument of mockery!

So, have a look at some of the meanest nicknames for you to choose from:

If the Andrew you know is like no other, then it’s best that you get him a nickname that’s as unique as his personality.

Here are a few pet names to get you started:

So, there you have it folks – plenty of awesome nicknames for someone named Andrew. We hope that our all-inclusive list has guided you to choose the perfect pet name for your loved one.

Lastly, in case you feel like we’ve accidentally left any popular nickname or you’ve come up with a creative endearment, then don’t forget to share it with us!