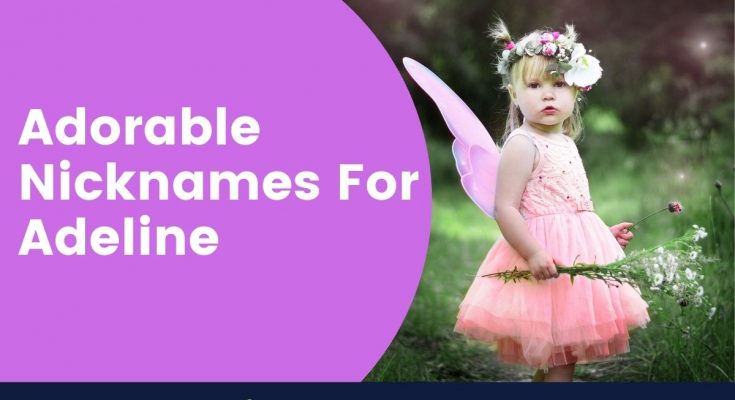 Have you named your daughter Adeline? If yes, then it’s important to pick a cute nickname for her. In this article, you’ll find plenty of adorable nicknames for Adeline that will make her smile with fondness. All you need to do is choose the nickname that suits her the best!

The nick-naming job is serious business. After all its identity, its equation, it needs to pop right, descend well — its psychology, mathematics, chemistry, and evolutionary sciences all rolled in one! Well alright, maybe not! But undeniably important it still is. And if you are here looking for the very right nickname for your Adeline, you are in good hands.

A nickname helps establish your personal brand with a person. And one that’s likely to stick for a long-long while too. See we get the gravity of it.

And you need not fret anymore. We have curated for you here a list of over 50 nicknames for your Adeline, listed in categories of cute, funny, etc., and have also included a little help along each name to ease out the task.

Well, right before you go along and make your pick, let’s quickly peek at the origin and meaning of the name.

Origin and Meaning of the name Adeline

Much like the aura it carries, Adeline in fact means, ‘noble’ or ‘nobility’. It is a name with French Germanic roots and is considered a derivative of the French Adele, which stems from the German adal, originally meaning ‘noble’ as well.

The name Adele seems to have come to England with the Norman invasion in the 11th century and evolved to be Adeline.

The nobility has generally been inclined to the name and there has been a distinguished Adeline in almost every field, from a tennis player to an actor, journalist, politician, and more. In fact, the famed author and in many ways a feminist pioneer Virginia Woolf was born Adeline Virginia Stephen.

Your Adeline by virtue of her name might sit among the royalty indeed (intellectual and otherwise), but let’s help you find the very right nickname to establish that personal connection with… her noble personage. Ha!

Your Adeline might be that or laid back, witty or quirky or all together, don’t worry we shall get you to one that fits just right.

Here is a collection of the tried and tested, loved, nicknames for Adeline. They have the crispness, the love, and the cuteness that Adeline is bound to love. Dig right in.

You sure want to pamper the Adeline in your life, and while gifts and other material tokens are welcome nothing can bring you closer together than the exchange of the love compressed in a highly adorable cute pet name.

When it comes to nicknaming a little humorous tug never hurt anyone. It’s great to keep up that friendly but teasing vibe going, and the living spirit high!

If you are looking for a breezy and trendy name for Adeline, well here we are with the coolest picks of nicknames for Adeline.

If you just won’t have a regular nickname for your sweet sweet Adeline, here’s a set of highly creative nicknames, rather different, but that shall set the connection between you apart as well.

So, there you have it – a lot of creative nicknames for your beloved Adeline. Hopefully, you have found the most suitable nickname for her.

Remember, every person will have their own favorite nicknames for Adeline. Some like to call her Jughead, some call her Short Adele. No matter which name she goes by, she is the most popular girl at her school and many people wish they had her nickname.

Thanks for reading this article. Is there any particular one you loved a lot, do share it with us. We love to hear your input.