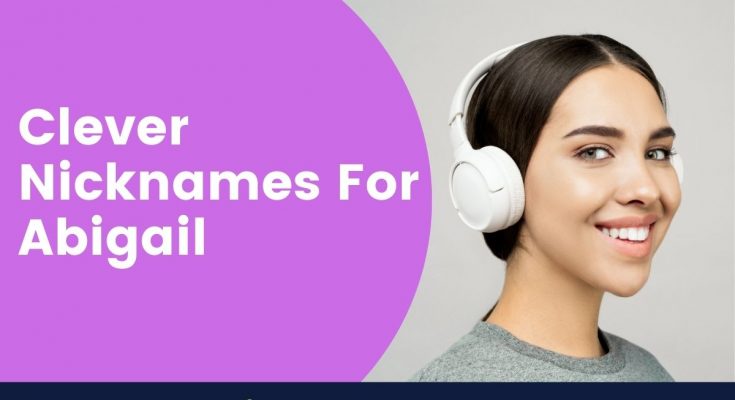 Abigail is a wonderful name that one can wear right through their life. First, it doesn’t sound babylike at all, and second, this Biblical name effortlessly stands the test of time! We love the fact that it ages well, and carries a tone that sounds pleasant to the ears.

Finding the perfect nickname for the special woman in your life is no child’s play. This is why, in today’s article, we have handpicked over 50 clever nicknames for someone named Abigail. Additionally, each nickname is accompanied by a friendly description to help you pick the one that fits your beloved like a second skin!

But before getting started with our list of nicknames of Abigail, let us first explore the meaning of this name and where it hails from.

Meaning And Origin Of Abigail

The name Abigail is a female title that bears a Hebrew origin and translates into “my father is joyful.” It is a derivative of Avigail, another Hebrew name, and is taken from elements such as “ab,” which means “father,” and “gyl,” which means “to rejoice.”

Abigail was a wise, beautiful, and prophetic woman, and the wife of David in the Old Testament. However, towards the inception of the nineteenth century, this name became a term to address maids. Apart from Abigail’s sensible image and biblical roots, this name stands at the top 11 among the most popular female names across the United States, according to the Social Security Administration data of 2018.

Thanks to famous stars like Abigail Breslin, Abigail Ratchford, and Abigail Spencer, this name has garnered massive popularity across several parts of the world. Abigail has also been featured in shows like Mad Men, Days of our Lives, and Skins.

Now that we are familiar with this name, let us jump right into the list of over 50 awesome nicknames for Abigail!

A cute nickname is an outstanding way of addressing someone who means the world to you, and makes them smile from ear to ear! This is why we have listed some of the most adorable pet names for a woman named Abigail. Have a look:

If the special girl named Abigail in your life is blessed with a good sense of humor, then we bet she will appreciate a funny nickname that lifts her spirits!

If you are ready for some pun, then scroll through some of the most whimsical pet names that we have listed below for you:

Perhaps your loved one could use a minute’s laugh with a weird nickname that is tailored just for her! Below, we have assembled some of the quirkiest pet names for someone named Abigail, so have a look:

Meeting new people in your life sure might be easy, but finding the idiots who will stay through your thick and thin is indeed a rare thing. This is why, you need a goofy nickname for your loved ones, to remind them how special and silly they are!

Listed below are some of the wackiest pet names for a woman named Abigail, so have a look:

Don’t you mind the length! A shorter nickname is as fabulous as a longer one! If you need a teeny-weeny pet name that is significant in terms of the effect for the woman named Abigail who is close to your heart, then look no further than this list:

So, there you have it, over 50 clever nicknames for someone named Abigail. We hope that our roundup has helped you find a pet name that resonates with your beloved’s personality or at least inspired you to curate one of your own.

Remember, it is more about your honest effort and affection which the girl named Abigail in your life will cherish for years to come!

Lastly, in case there is another worthy nickname that you think is a must-add to our list, then be a dear and make sure to share it with us.